Never in my WILDEST dreams would I have thought I would get the chance to travel to the continent of AFRICA!  Honestly, I had never put any thought into traveling to anywhere in Africa… besides Egypt.  What would I do?  What would I see?  What are the necessary preparations to get there?  None of this had ever crossed my mind… UNTIL…

My step son proposed to his wife, who is from Uganda.  After several months of dating, the two decided to take the relationship to the next level with the proposal.  It is common tradition in Uganda for the husband-to-be to provide a dowry to the bride’s family during the formal introduction ceremony called a Kwanjula.  During this time, he would also formally ask her family for her hand in marriage.  His family, of course, is expected to be present for the grand occasion.  And so the planning started.

I never knew that there would be so much prep work into traveling internationally to Africa.  Already having an unstamped passport, this would be my FIRST international flight outside of the United States, and a guaranteed STAMP!  I was super excited and filled with very much anticipation of what to expect.  Before the trip, all of the necessary vaccinations had to be secured, including the Yellow Fever vaccine, to which you have to have a yellow card in order to ENTER into Uganda.  No if’s and’s or but’s.  Flight plans were secured as well as bookings for hotels and excursions.  My husband is a BEAST when it comes to planning any trip, so we discussed the opportunity to leave a few days prior to the event so that we could visit EGYPT before our stay in Uganda!!!  Since we were going to Africa, we may as well see Egypt while we are that close.  I… WAS… OVER THE MOON!  I have always loved and have been fascinated with Egyptian culture, and I was going to see at least ONE of the 7 Ancient Wonders of the World!

And so the day of the trip came and we departed New York flying on Emirates Airline.  The flight from New York to Dubai was around 12 hours (The longest flight I have ever taken).  The flight accommodations were AMAZING and I highly recommend Emirates Airline for any of your Asian and African trips.  After a short layover at the airport, we leave Dubai and head to Egypt!  (We will definitely be coming back to enjoy Dubai in a separate trip.)  The flight took about 4 hours… And we finally arrive on the continent of Africa in the city of Cairo!  There was so much to experience, so much to take in, so much to do in so little time!  Needless to say, we met up with our Guide, and our first visit was to the Pyramids of Giza. 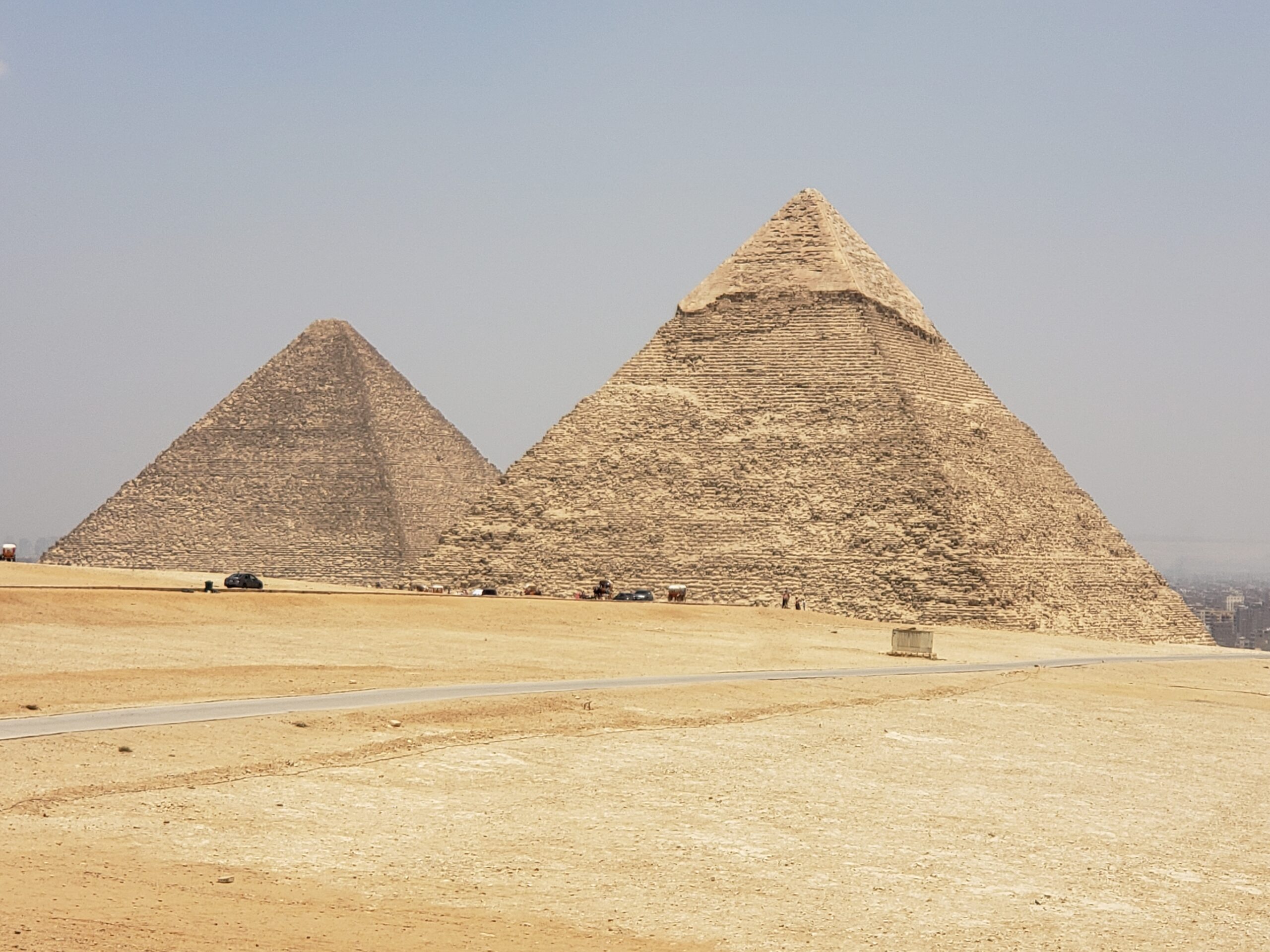 Here we are at the Pyramids!  They are just as big as you would imagine.  They are also literally right next to the city, not out in the secluded desert like I thought they would be.  We actually got a chance to GO INSIDE of the Great Pyramid!  Just a friendly word of advice… PLEASE bring plenty of sunscreen and dress accordingly if you ever decide to visit Egypt!  It was VERY hot during the time we were there (mid July).  Inside the pyramid has to be one of the hottest places I’ve ever encountered, but that didn’t stop us from making the climb to the burial chamber.  We wanted to take full advantage of the excursion and was determined to see the burial chamber of King Khufu.  The climb from the base to the middle of the pyramid  was physically taxing and challenging because of the heat and the height of the corridor (about 1.2 meters high). 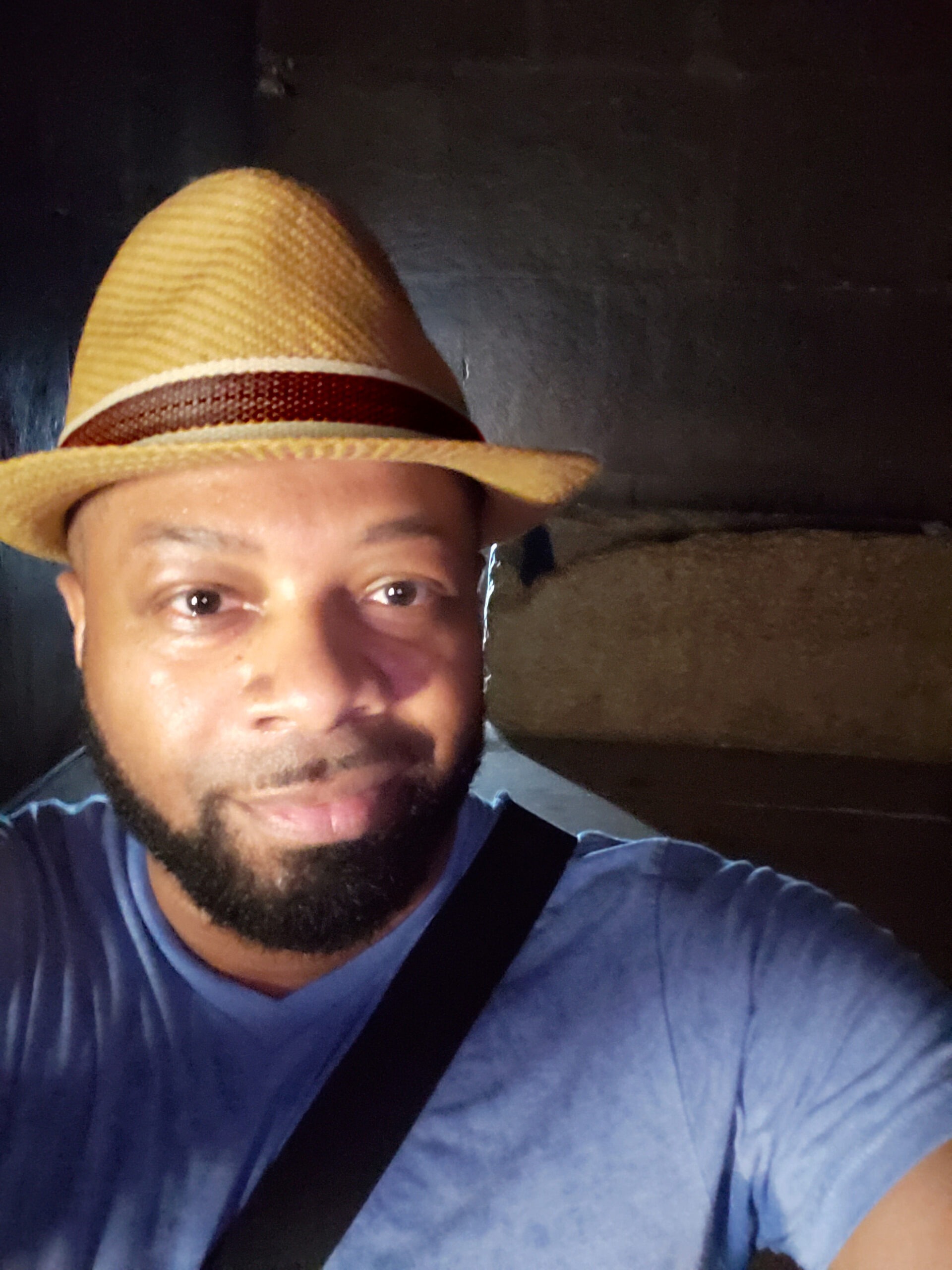 Here I am inside the pyramid in the kings burial chamber.  Behind me is the empty sarcophagus.  I am exaggerating a little, but it had to be about 170 degrees inside the chamber.  I quickly paid my respects, marveled in awe, and got out of there before I was baked to a crisp. 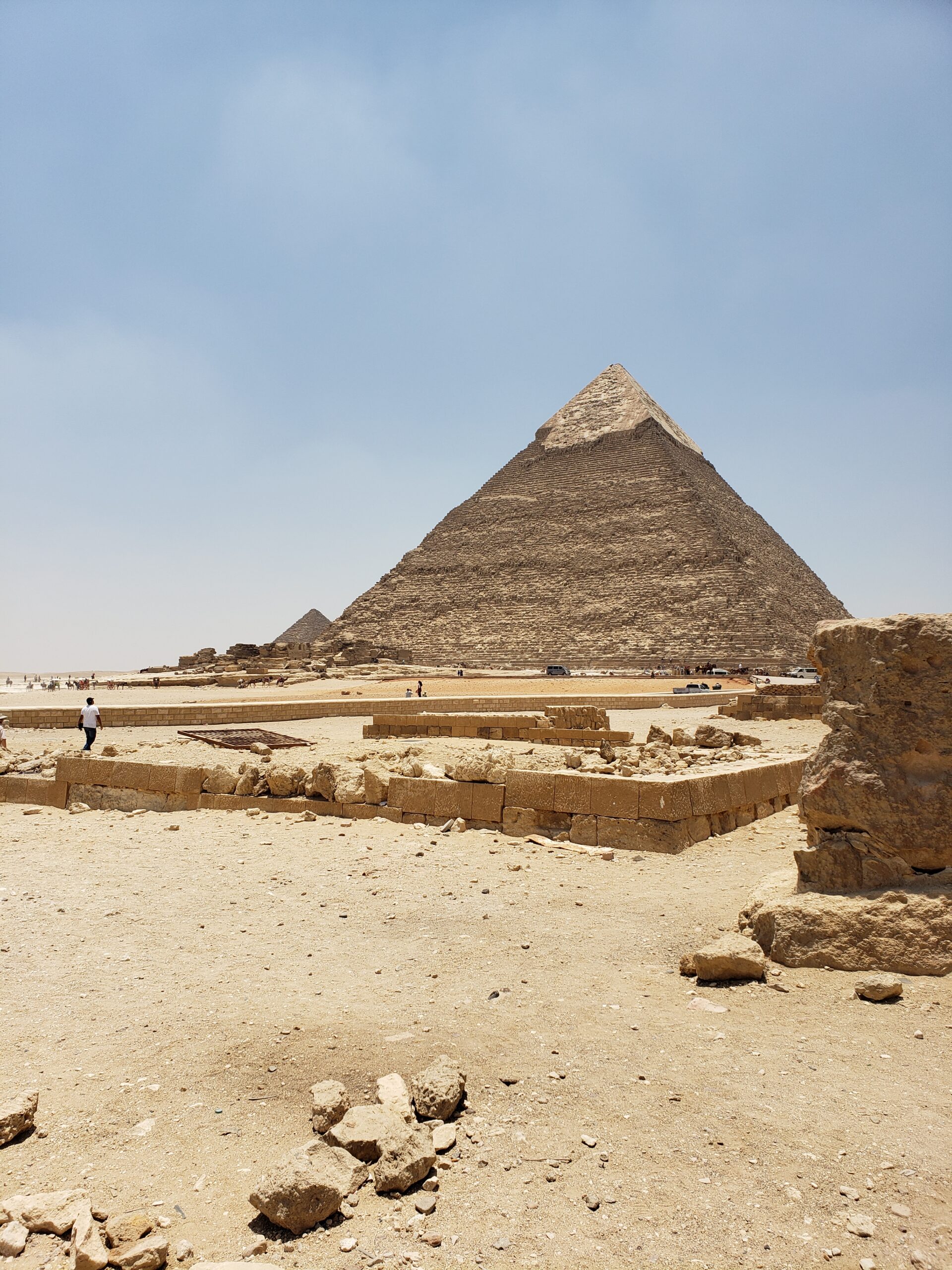 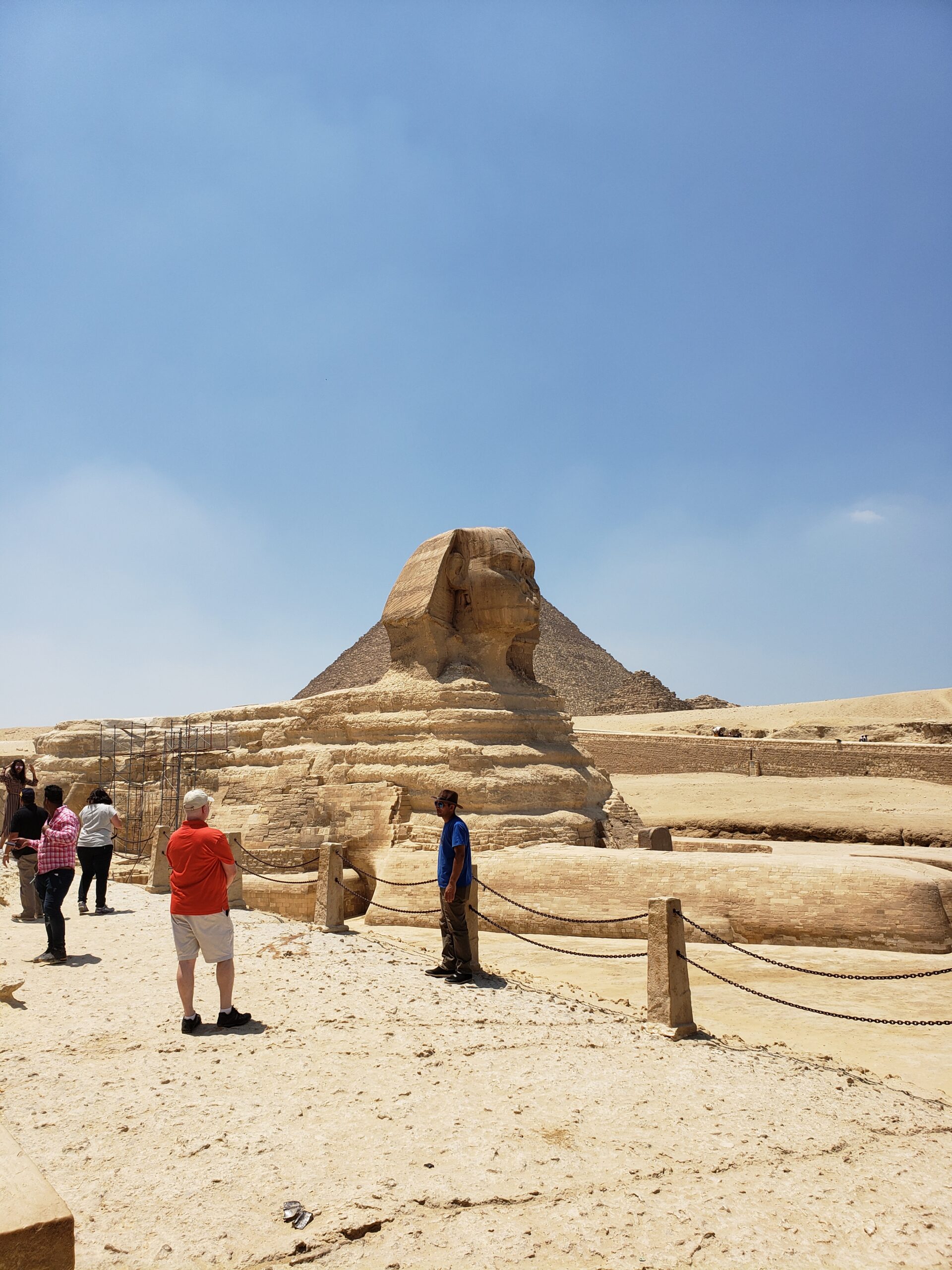 After visiting the pyramids, we visited the Sphinx.  Seeing it in person was as awesome as you would think.  It was smaller than I had imagined it would be, but it was majestic nonetheless.  I was in awe of the stark contrast of the dry, sandy, absolutely no humidity environment compared to the lush, green, humid environment of Coastal Georgia.  I don’t remember seeing ANY green during our stay in Cairo.

After an amazing and awesome visit at the pyramids and the sphinx, we visited the town and the shops.  We got the chance to see how to make authentic papyrus, and was able to purchase some of the beautiful and elaborate wall hangings.  Next, we visited an oil shop that was every bit as aromatic as you can imagine.  The warmth and hospitality that we received while in Egypt was absolutely amazing.  We were treated as if we were royalty.  Since we were only in Egypt for less than 2 days, we had to bring this portion of our trip to a conclusion, but not before visiting one of the souvenir shops, where we purchased plenty of keepsakes and trinkets for family and friends.  We would definitely go back, and absolutely recommend visiting Egypt.

Now on to part two of our African trip.  After a trip back to Dubai (yeah, Dubai is the central hub for Emirites), we caught our connecting flight to Uganda.  OMG!  Lets talk about a BEAUTIFUL country.  Uganda (The Pearl of Africa) is just as beautiful as the pearl that it is compared to.  The scenery in the country side is absolutely breathtaking!  I have never seen sights so beautiful in my life, and at the same time been so humbled by some of the impoverished villages. 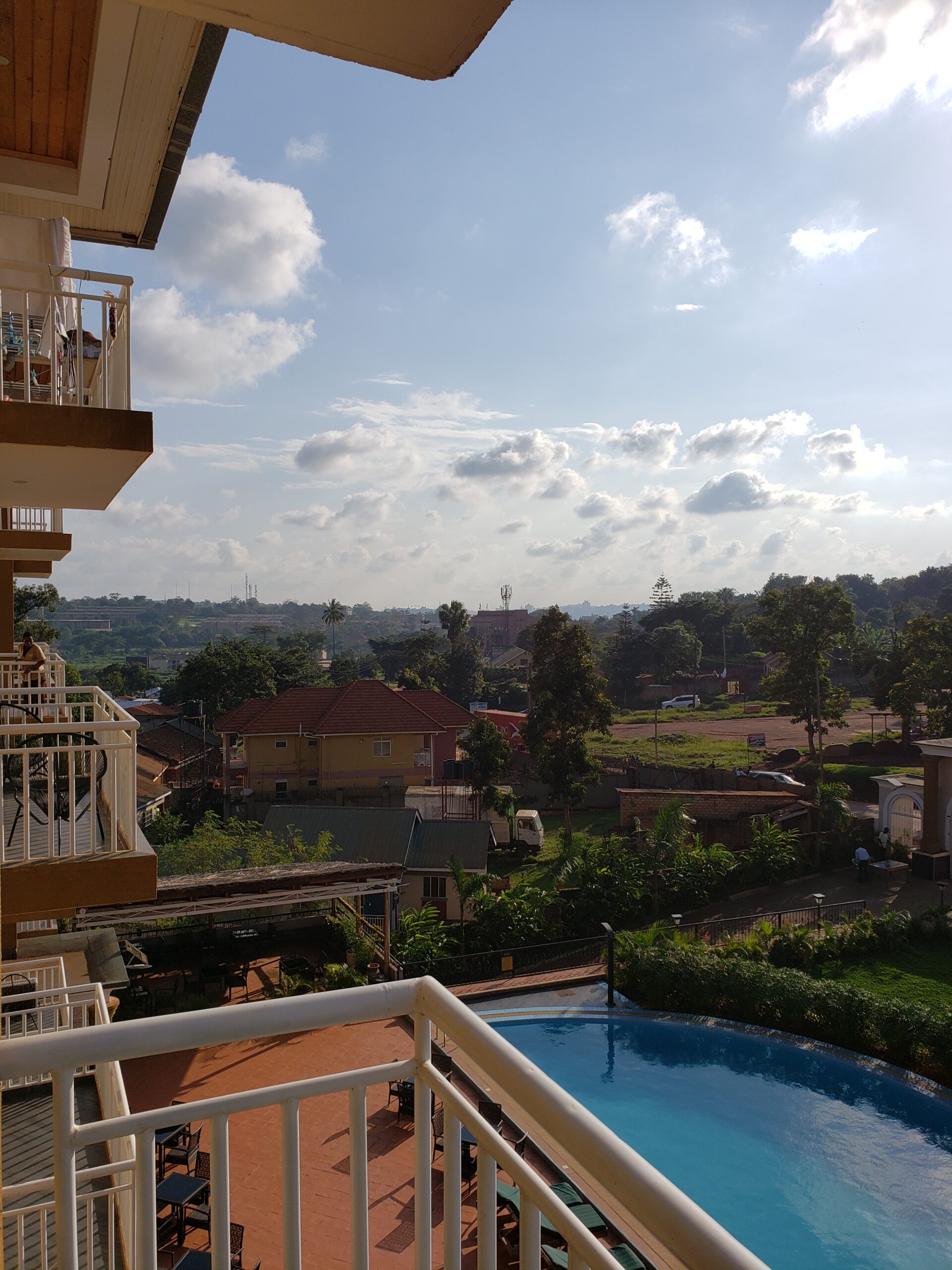 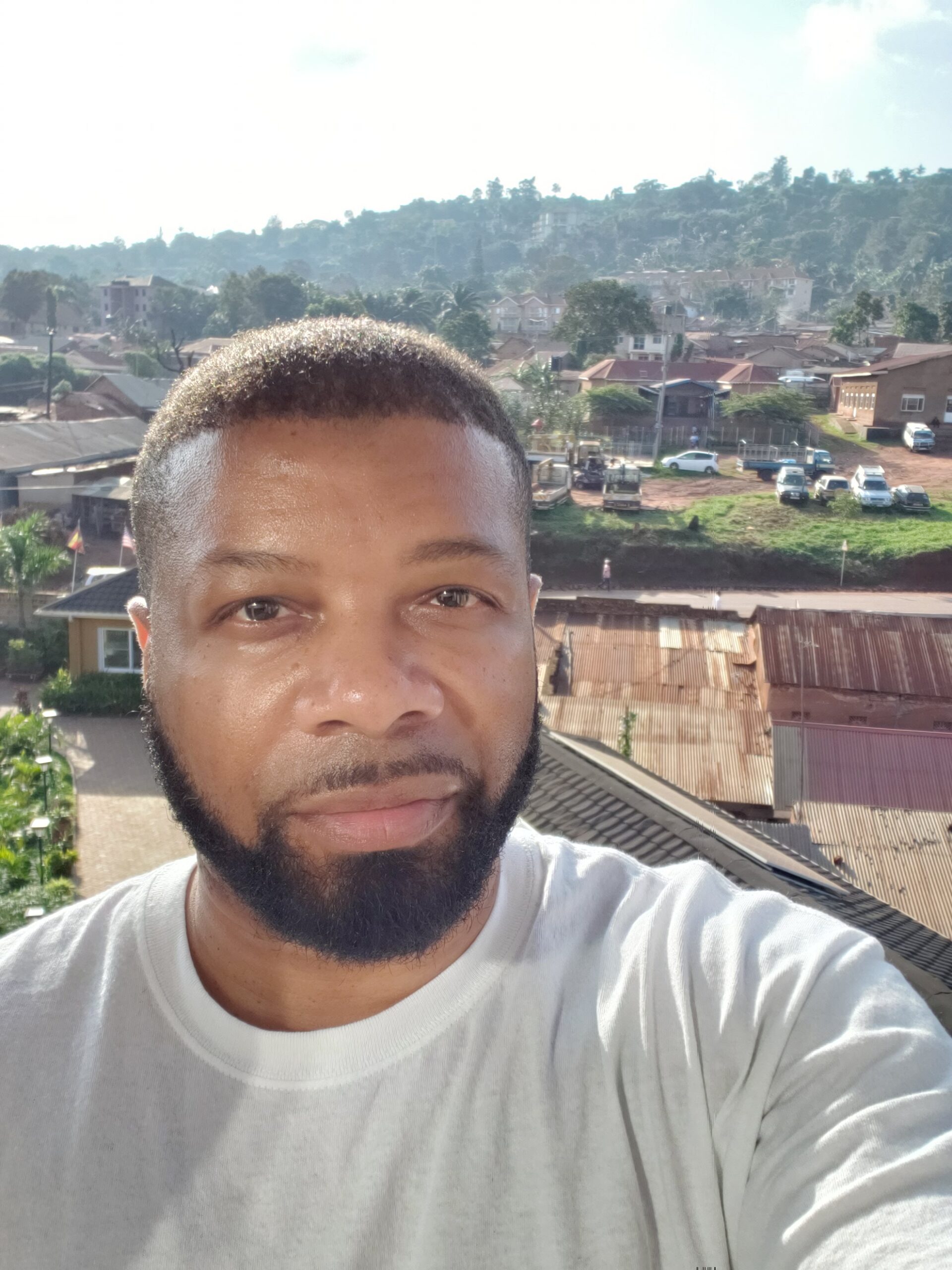 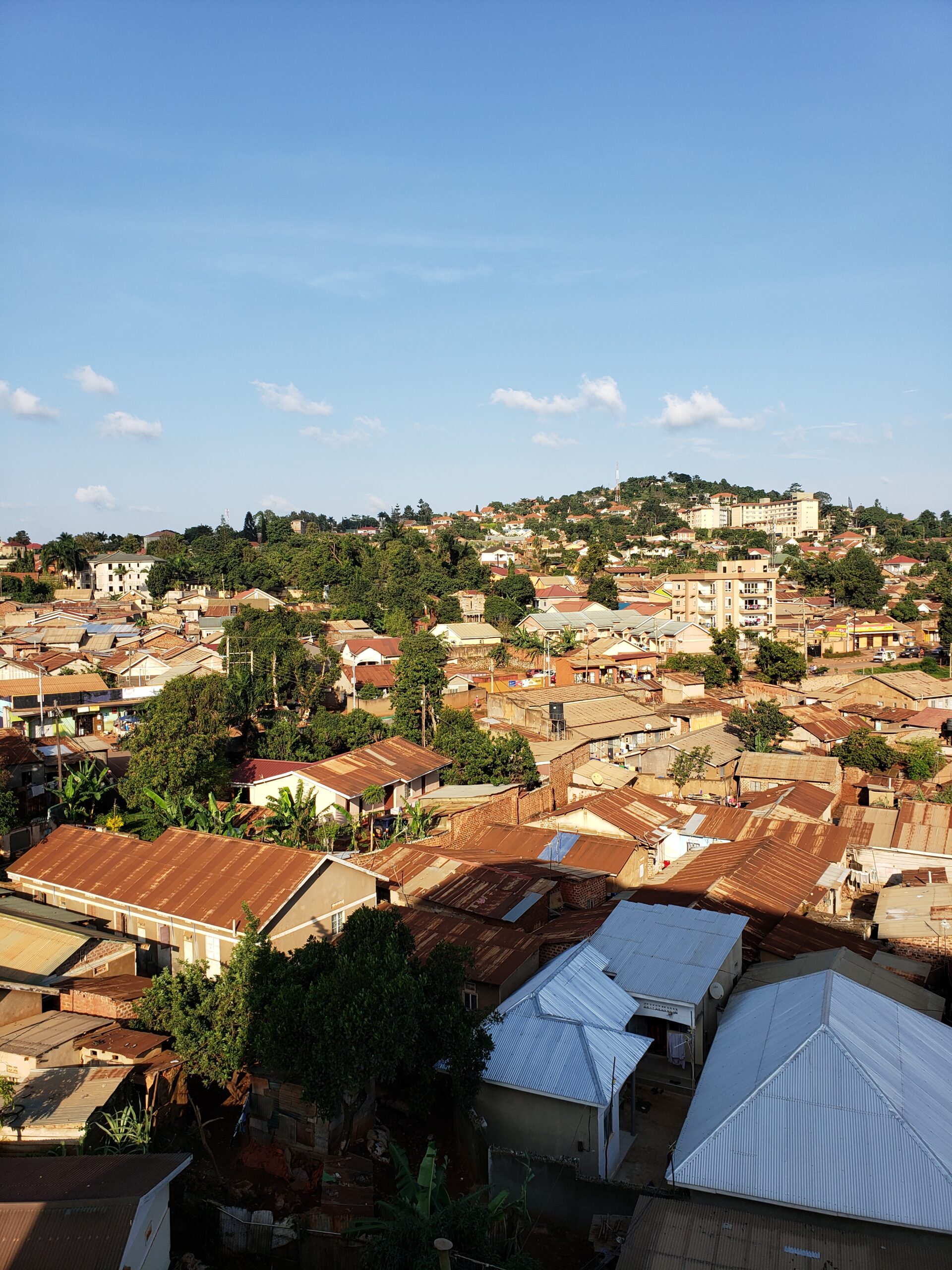 Our accommodations in Kampala were wonderful, and the hospitality was definitely felt.  I do have to admit that I was very nervous when we were out and about because of the traffic orientation!  OMG!  First, traffic flow is opposite to what we are used to in the United States, and there are motorbikes called Boda-Bodas carrying passengers that are speeding by and swerving in and out between traffic.  My anxiety was at an all time high when we had to leave the hotel… but the anxiety quickly subsided when we left the hotel for one of our main excursions, and arrived at Chobe Safari Lodge.  I can not describe how beautiful this place is with words. 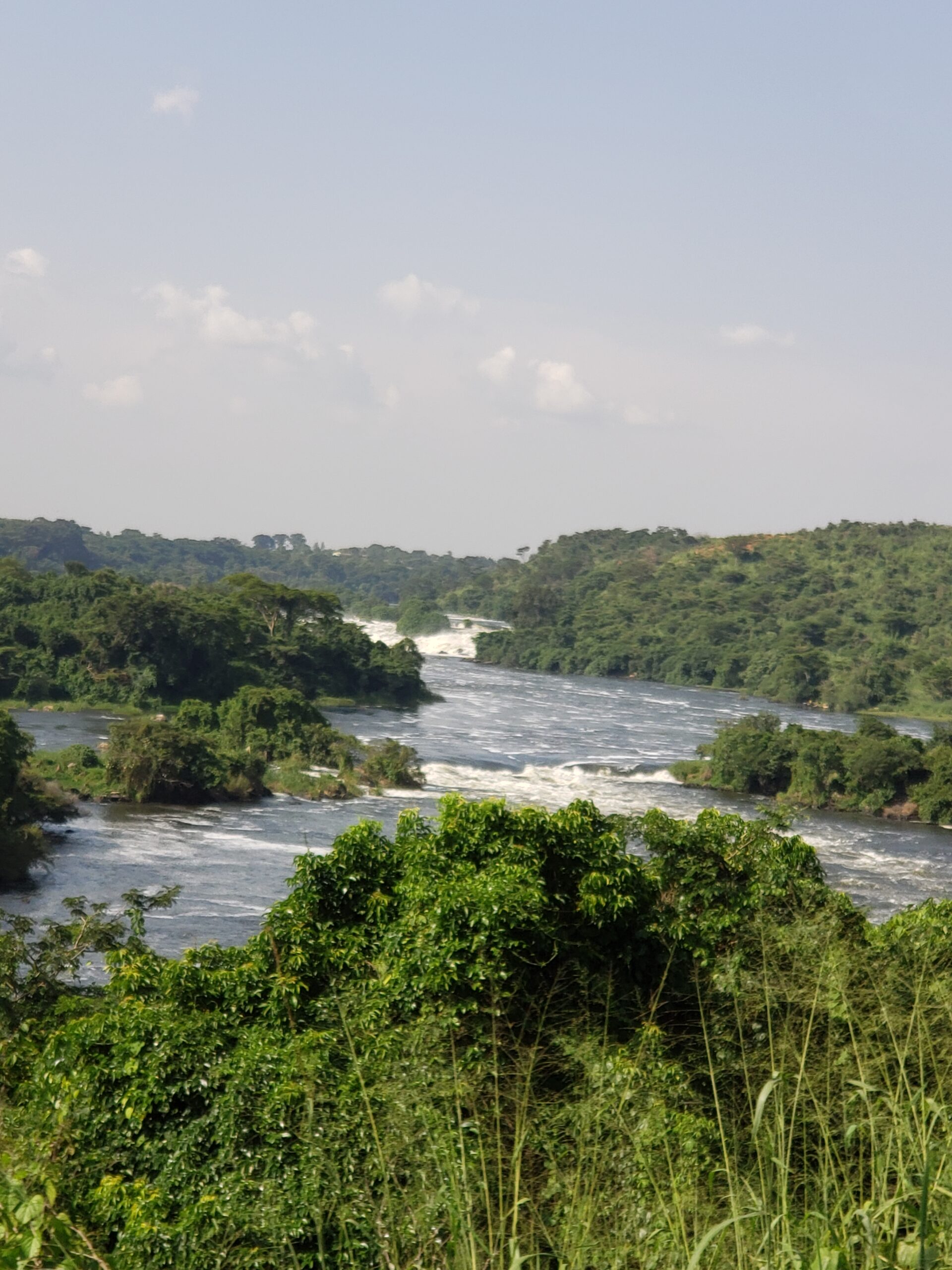 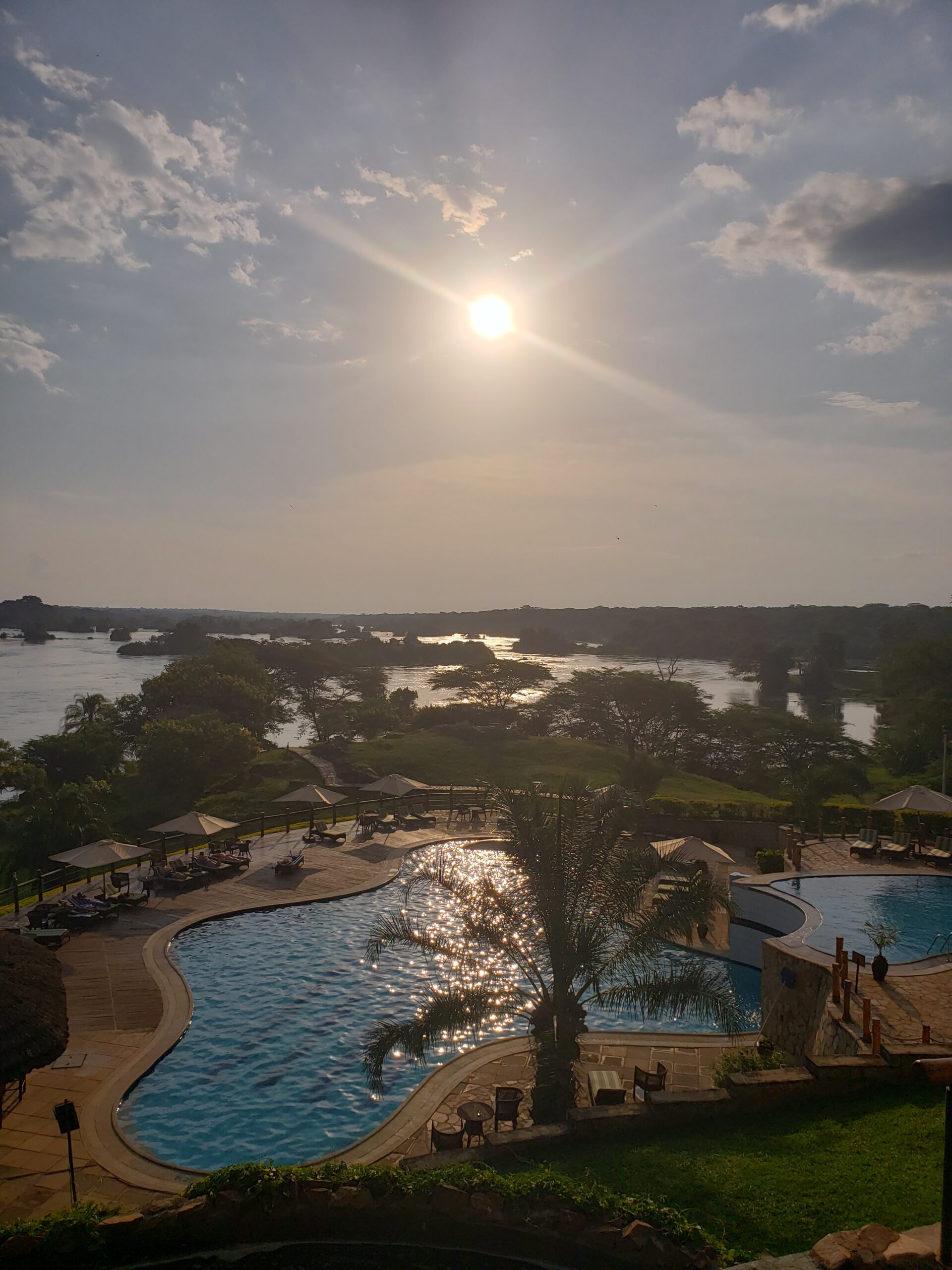 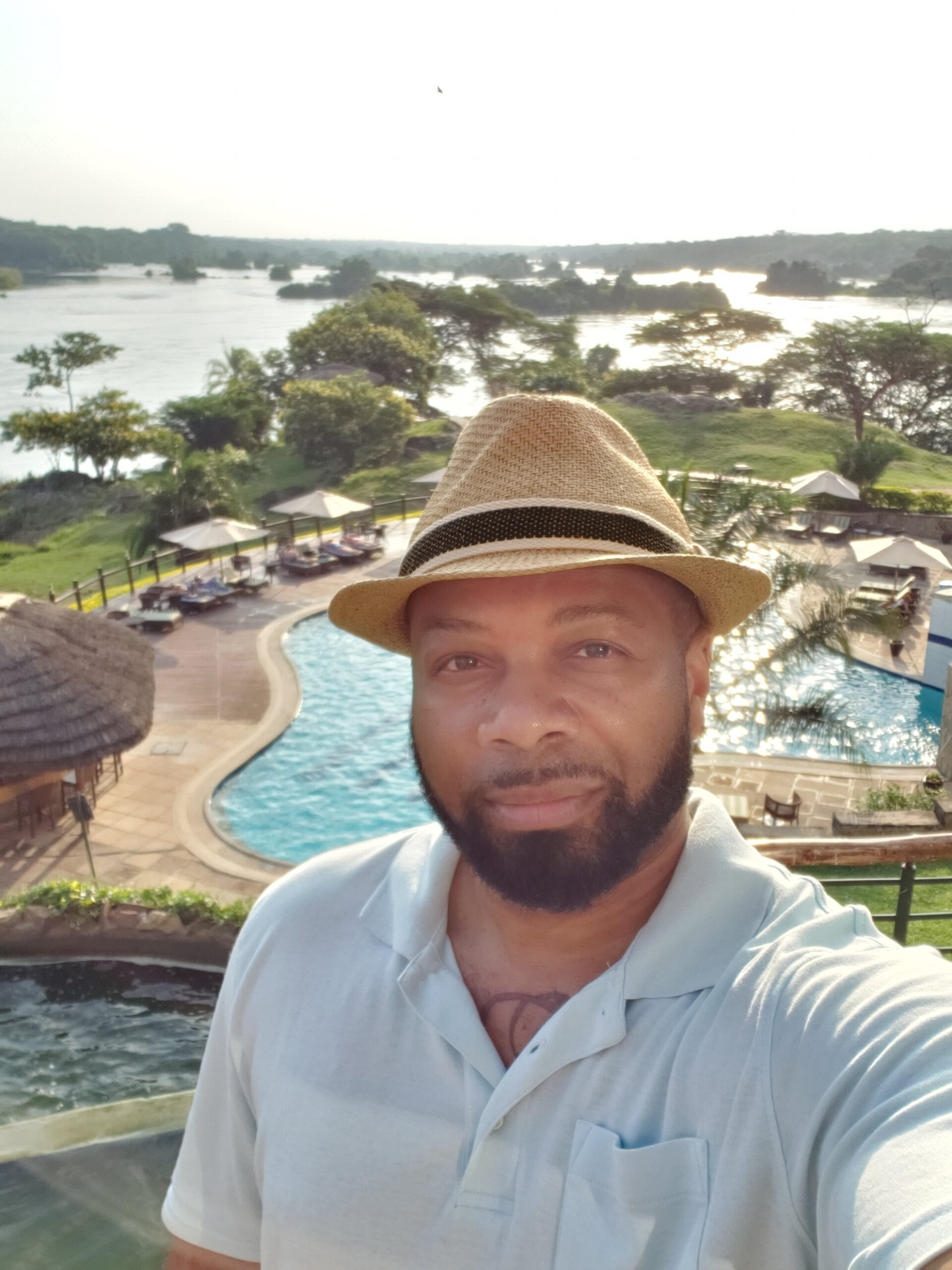 Chobe was literally paradise on Earth.  The view from the balcony is one of the most breathtaking views I have ever seen.  We must have stood there for at least 45 minutes just taking in the beauty… and taking some pretty impressive photos to remember for years to come.  There were hippos in the river, wart hogs running around the grounds,  small monkeys in the trees… wildlife everywhere.  It was just magical to be able to experience this paradise.  It is a little of a splurge to stay at the Chobe Lodge, but it is well worth it.

The next morning, after waking up at the crack of dawn around 5 o’clock in the morning, we embarked on a Safari in the Murchison Falls National Park where we were able to see all kinds of wild life in their natural habitat.  Now THIS was truly a once in a lifetime experience!  We saw everything from elephants, to giraffes, to antelope, to gazelles… you name it, and we probably saw it.  The guide gave us plenty of time for photo opportunities and to just take in the beauty of Africa. 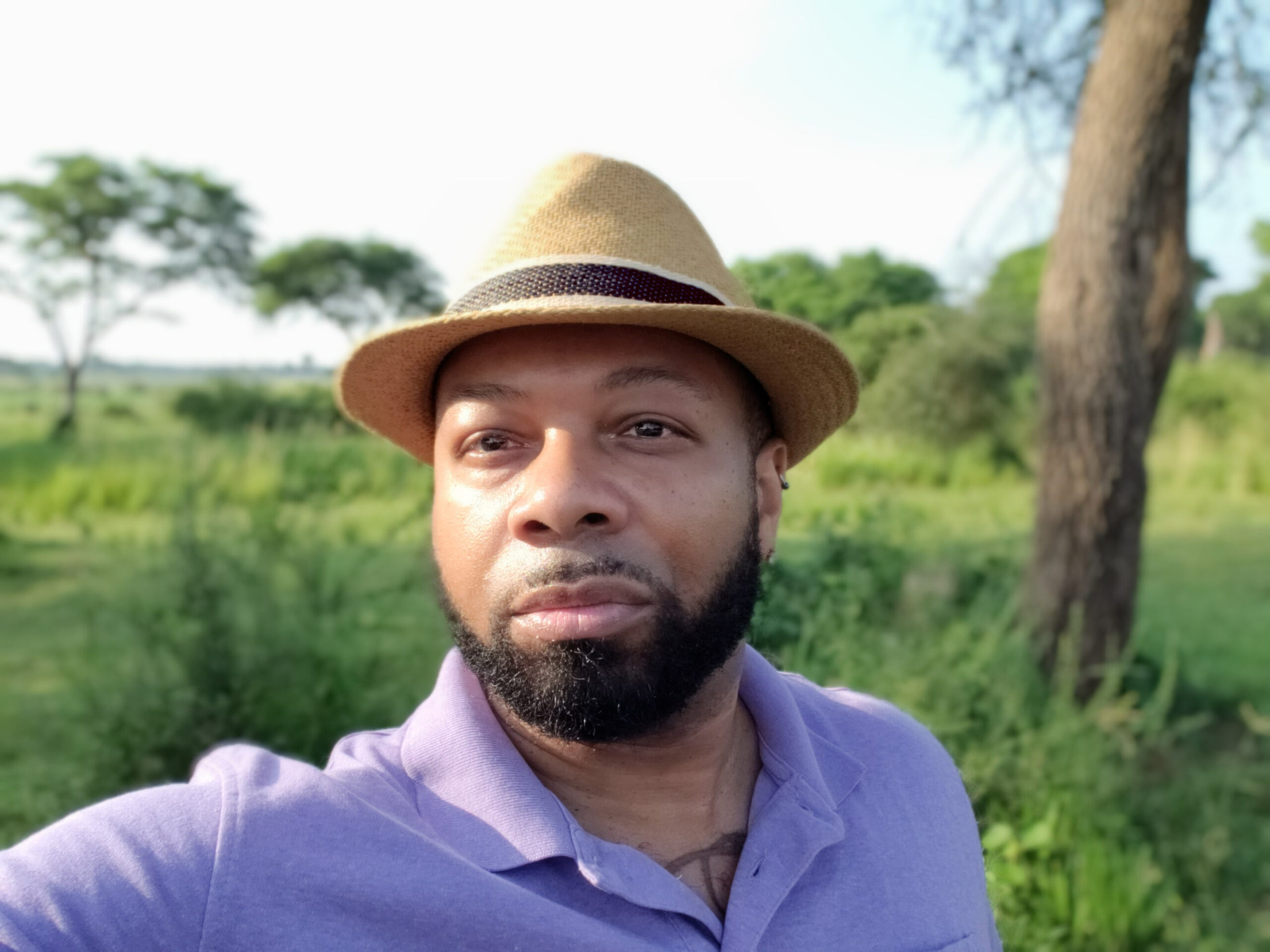 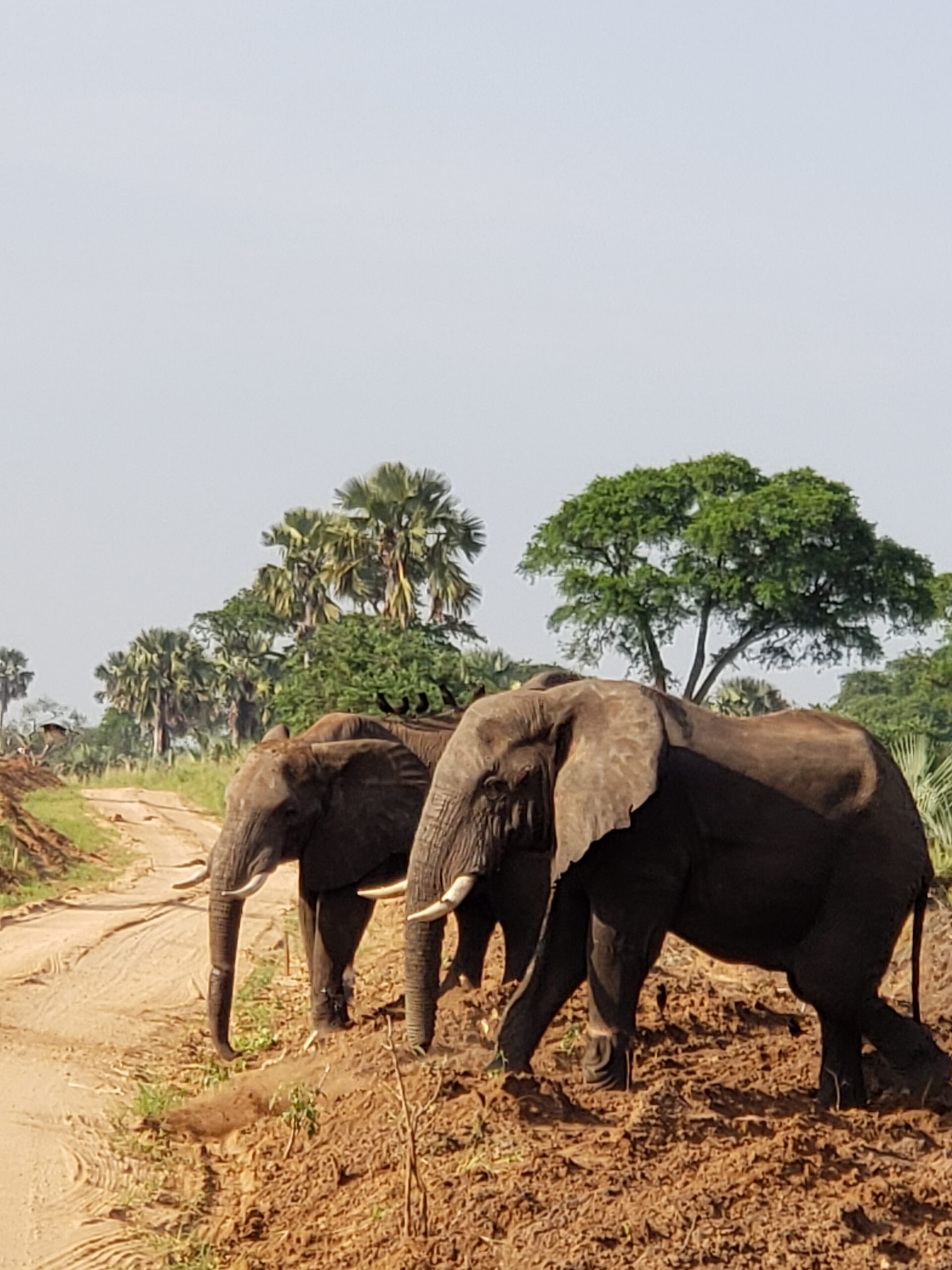 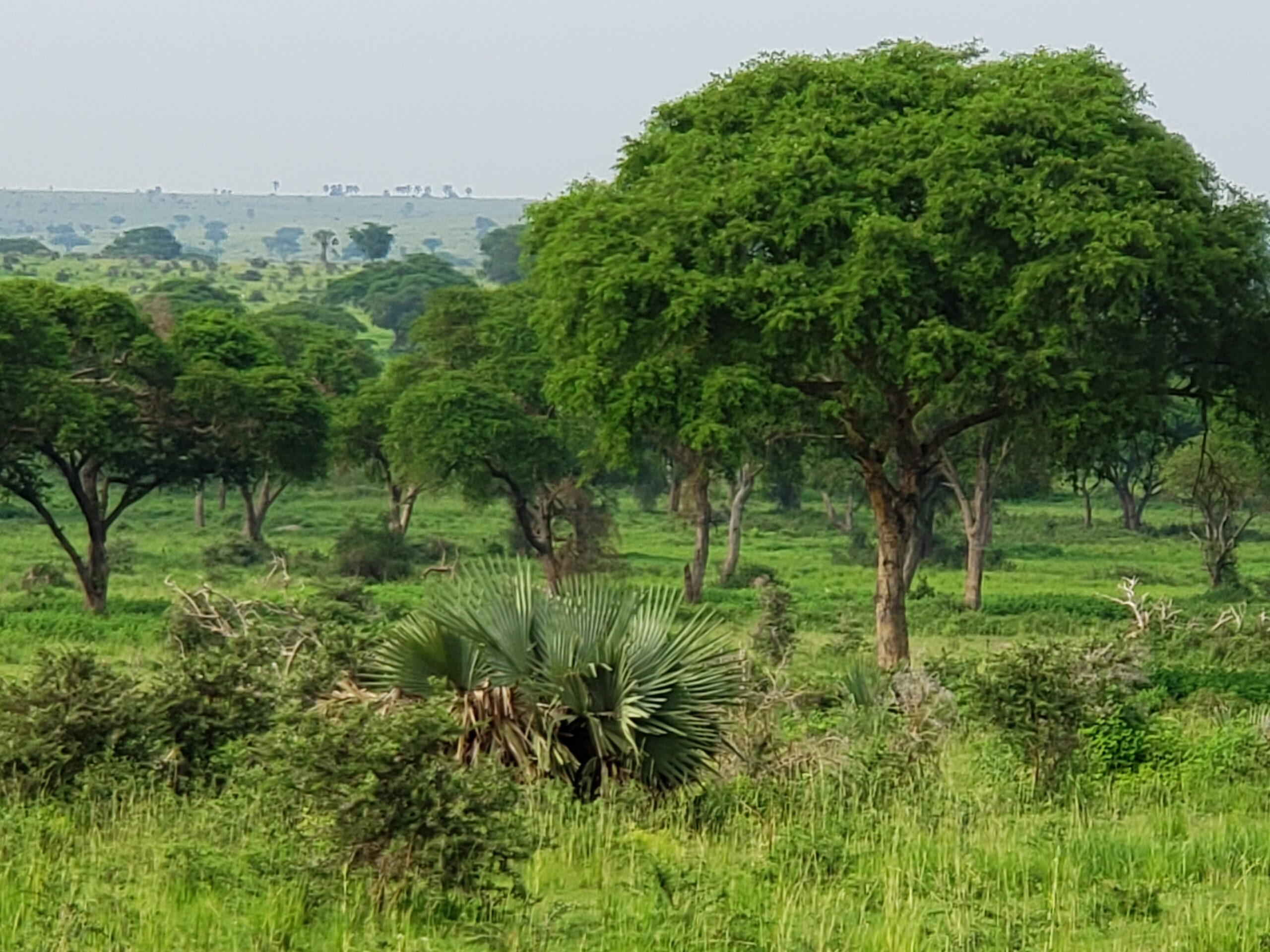 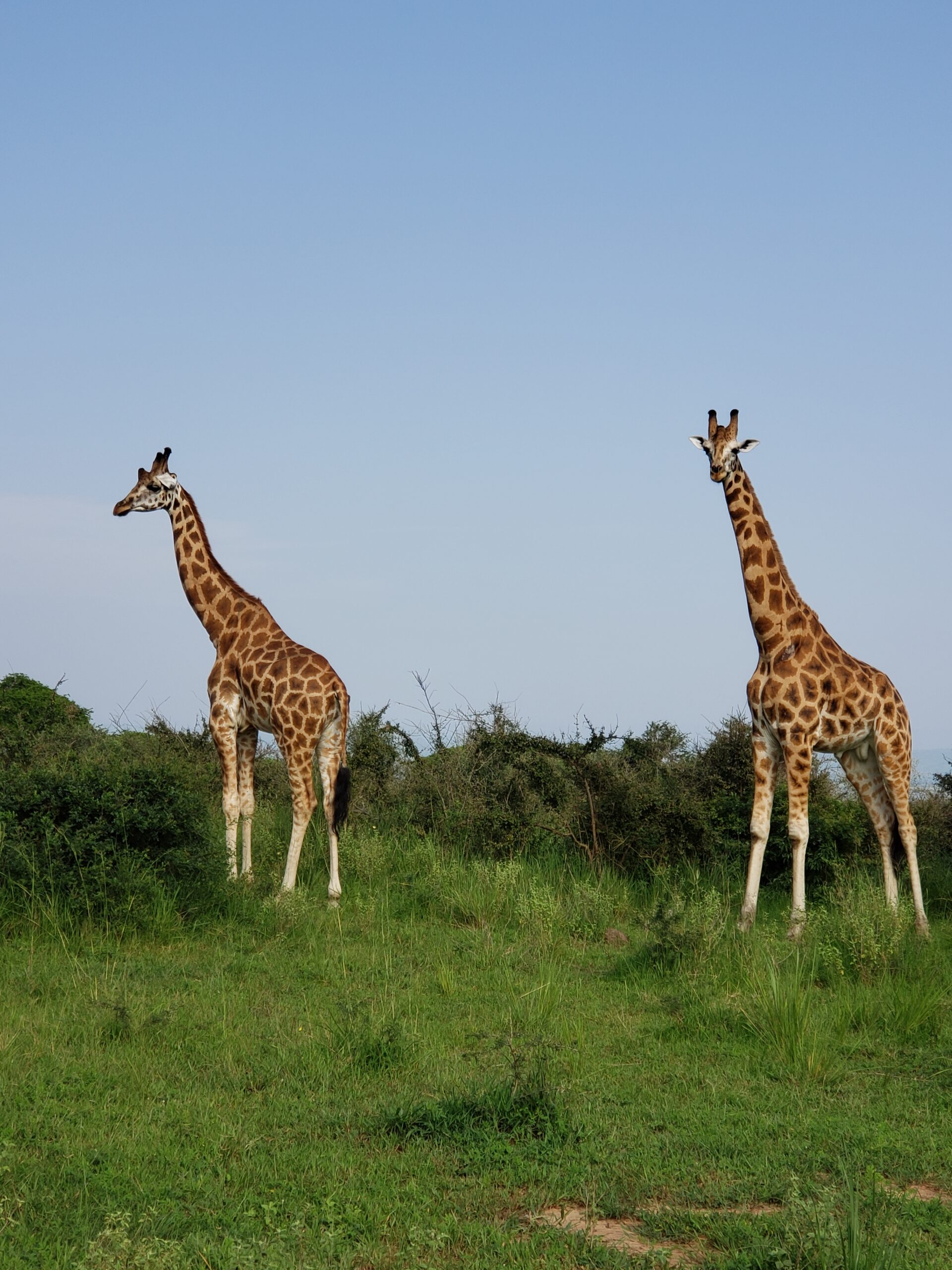 After the safari, we got a chance to take a 2 hour boat ride up the Nile River to Murchison Falls!  This was another breathtaking moment, to be in the presence of this very angry waterfall.  To really experience the full power and beauty of the waterfall, you have to make the hike up the trail from the base of the falls, which normally takes about 45-50 minutes.  Because of the magnificent photo opportunities and breathtaking views, it took us a little longer.  Also, the hike was not an easy hike, so the unexpected stops were very welcomed.  With the heat and the frequent stops, we made it to the top in about an hour and 10 minutes… and we were handsomely rewarded! 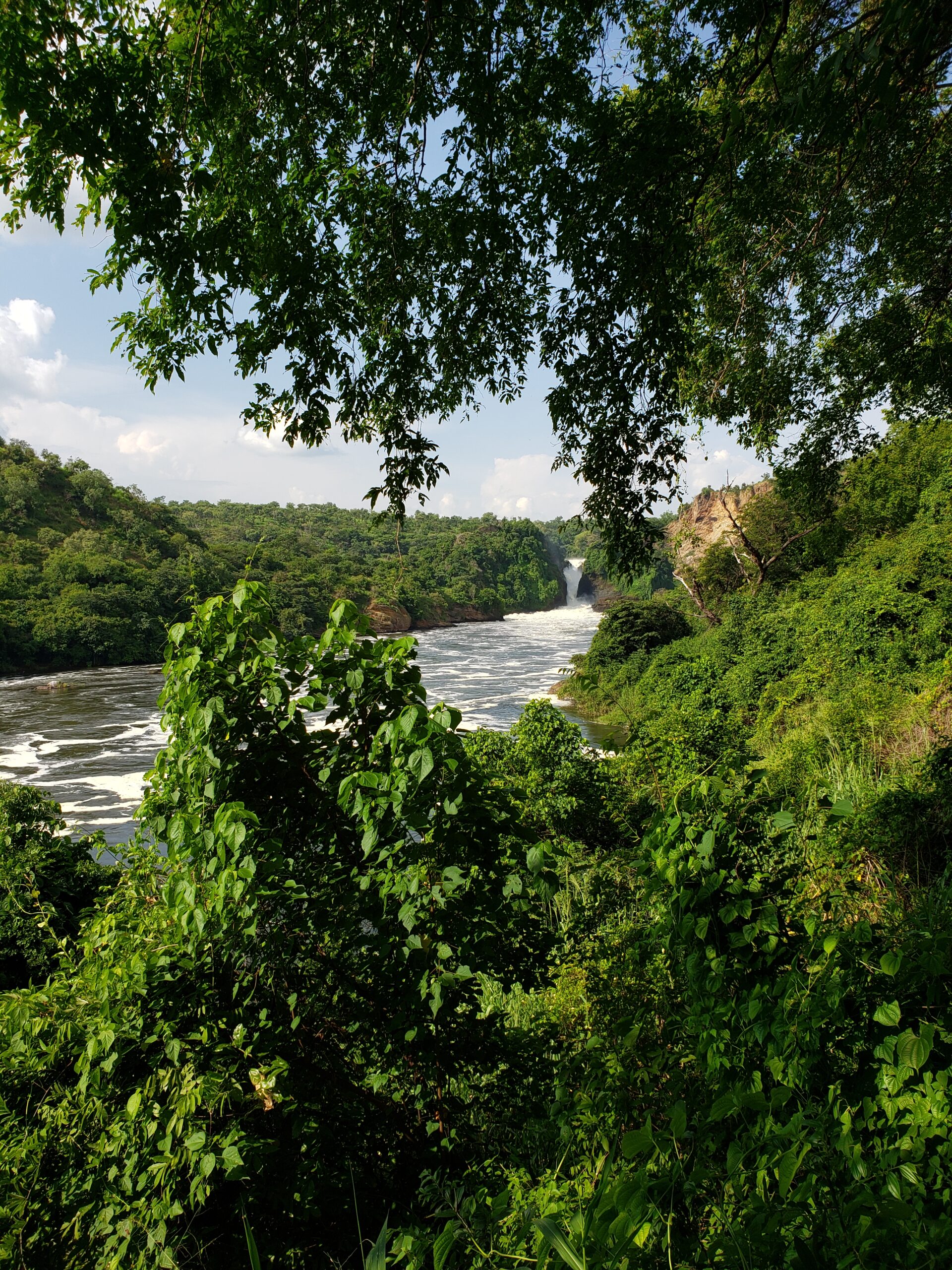 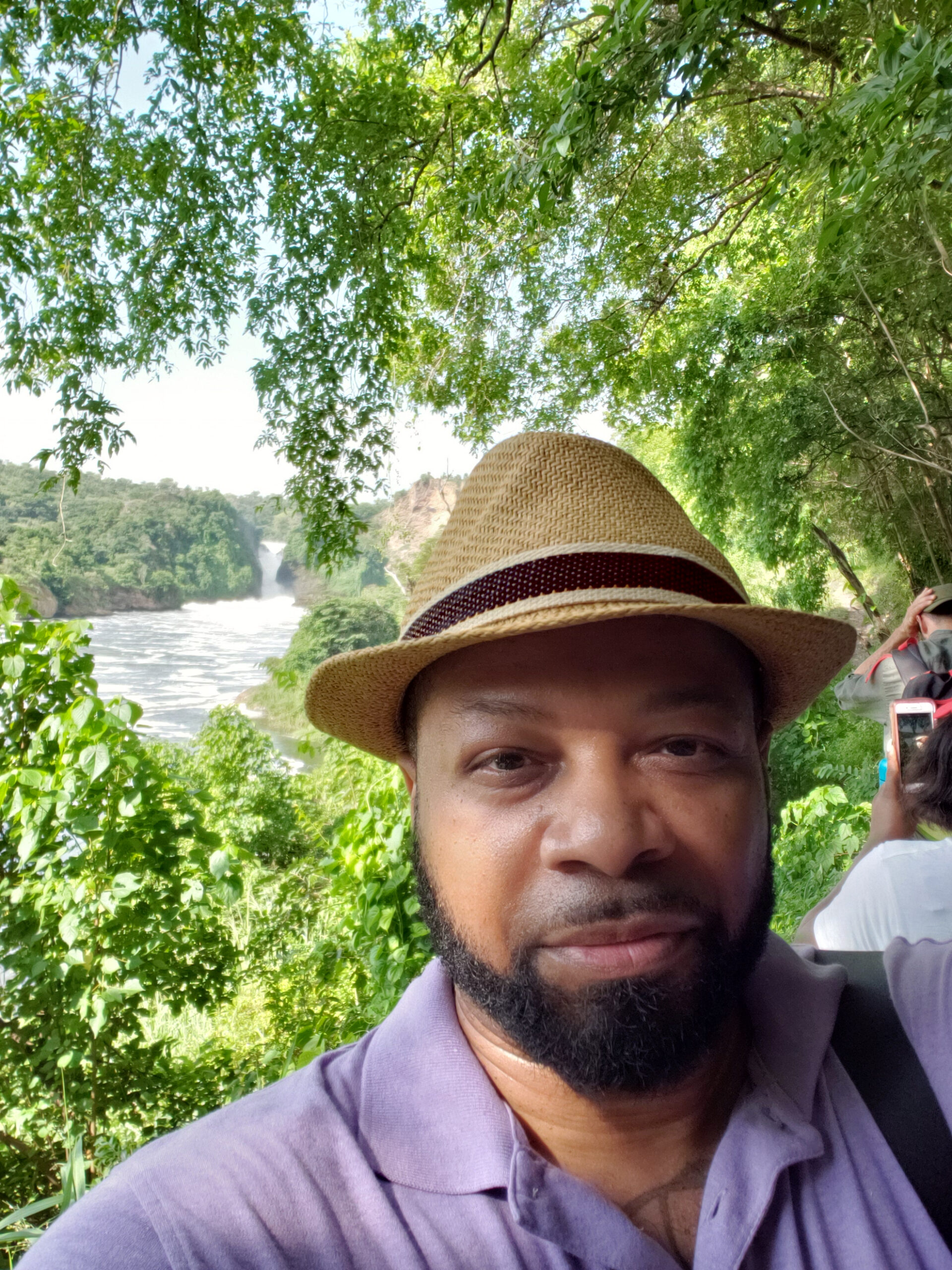 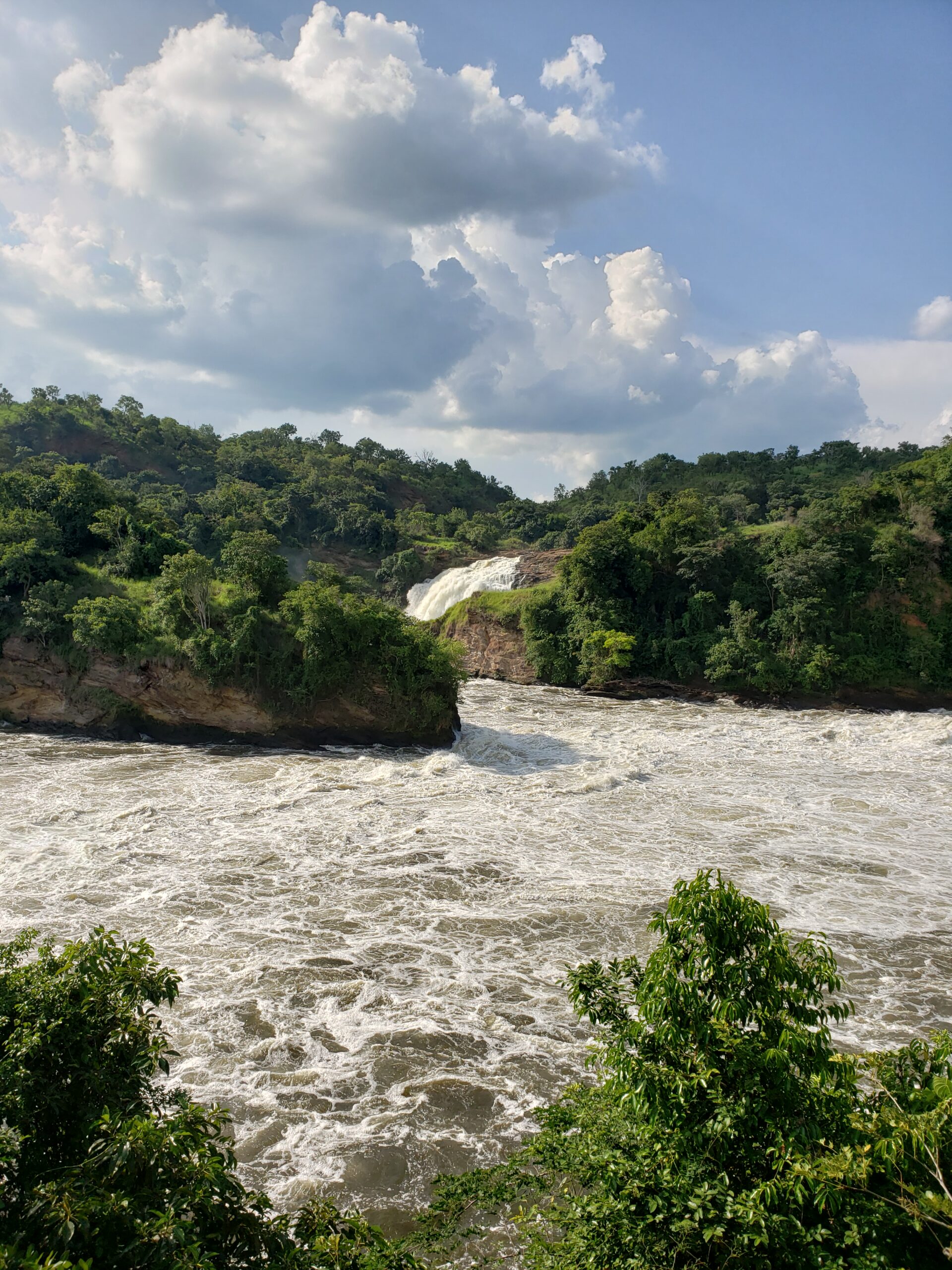 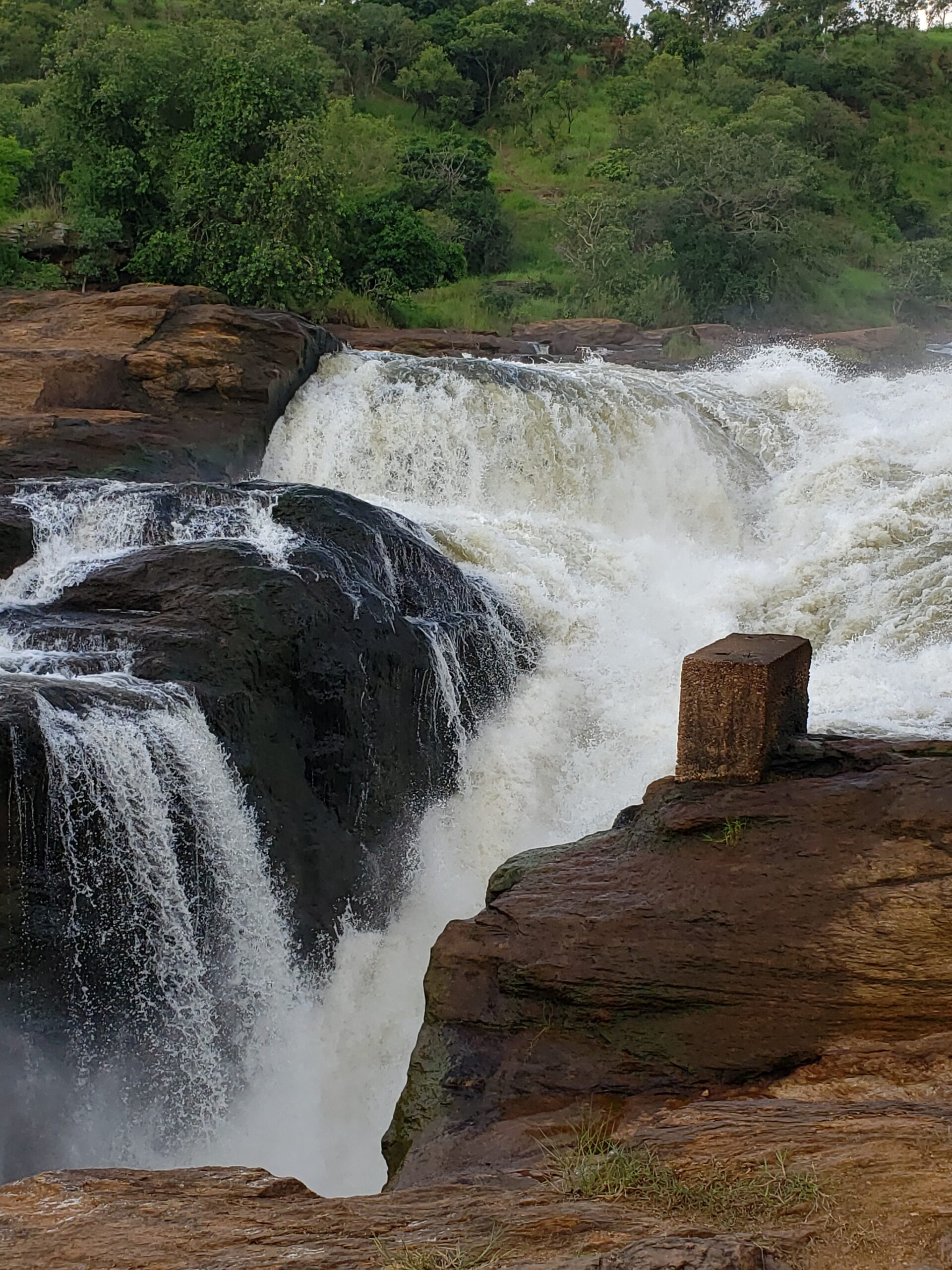 To experience the absolute power and majesty of the water cascading over the rocks… there are no words to describe the feeling.  I mean, it is literally known as “The Most Powerful Waterfall” in the world.  There is nothing to prevent you from meeting certain death if you venture too close to the edge!  I can’t say enough good things about Murchison Falls National Park.  This experience definitely does not owe me anything.

And then there is the reason for the trip.  The Kwanjula.  The big day finally arrived and everyone arrived at the venue and was dressed in traditional garb.  The women wore the gomesi, the brightly colored floor length dress with the signature puffy shoulder and sash.  The men wore blazers and the kanzu, the white or cream colored ankle length tunic sometimes embroidered with the tribe insignia and colors. 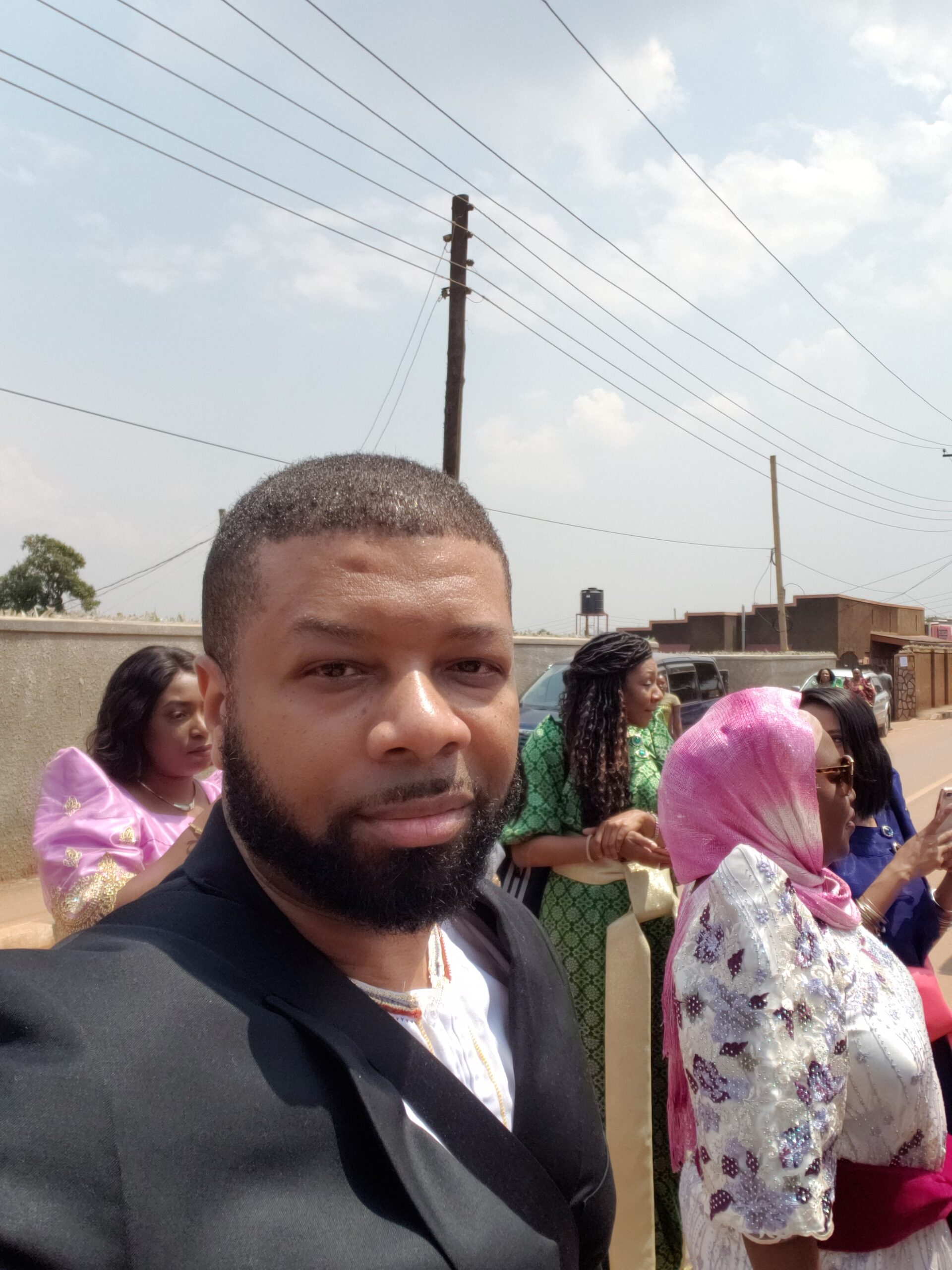 The event was absolutely beautiful.  It featured traditional dancers, the formal introduction of the groom’s family to the bride’s family, the presentation of the dowry, the presentation of the bride, and a traditional “joining” of families ceremony that was heartfelt and profound.  It was truly an honor and a treat to be present to experience the warmth, the love, and the history and heritage of a Ugandan Kwanjula.

I can say with the highest confidence that my trip to Africa was truly one that I will always remember and cherish.  I experienced so many new cultures, traditions, sights, sounds, and beautiful sights.  Cheers to many more memorable trips and experiences.

Your email is safe with us.

We're currently offline. Send us an email and we'll get back to you, asap.